In the Soviet Army, it takes more courage to retreat than advance 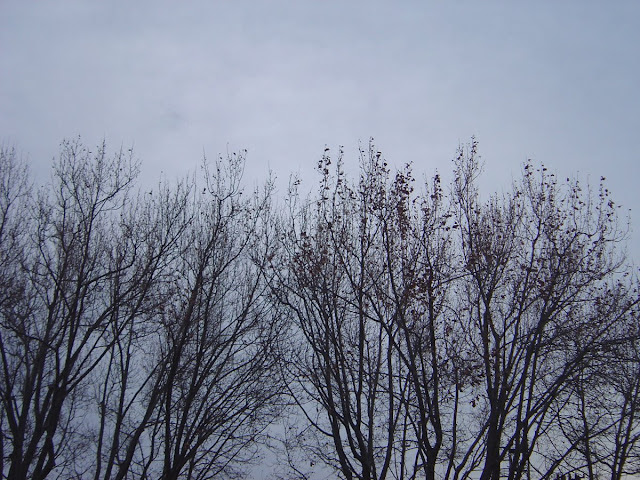 A grey old day today, as this photograph will attest. At the moment I am halfway through Pat Barker's Regeneration trilogy, which I am enjoying - if that is the right word - very much. I will endeavour to put pen to paper (fingers to keyboard?) afterwards and talk a little bit about them, but for the moment the experience has sent me back into the work of the poets of World War One.

For whatever reason, this grey sky had me thinking of a poem by Wilfred Owen that I first read maybe twenty years ago, and remains a favourite today. I thought that I would share it. Somehow, the words are even more powerful when you know a little about Owen's life and his eventual fate.

It seemed that out of the battle I escaped
Down some profound dull tunnel, long since scooped
Through granites which titanic wars had groined.
Yet also there encumbered sleepers groaned,
Too fast in thought or death to be bestirred.
Then, as I probed them, one sprang up, and stared
With piteous recognition in fixed eyes,
Lifting distressful hands as if to bless.
And by his smile, I knew that sullen hall;
With a thousand fears that vision's face was grained;
Yet no blood reached there from the upper ground,
And no guns thumped, or down the flues made moan.
"Strange friend," I said, "Here is no cause to mourn."
"None," said the other, "Save the undone years,
The hopelessness. Whatever hope is yours,
Was my life also; I went hunting wild
After the wildest beauty in the world,
Which lies not calm in eyes, or braided hair,
But mocks the steady running of the hour,
And if it grieves, grieves richlier than here.
For by my glee might many men have laughed,
And of my weeping something has been left,
Which must die now. I mean the truth untold,
The pity of war, the pity war distilled.
Now men will go content with what we spoiled.
Or, discontent, boil bloody, and be spilled.
They will be swift with swiftness of the tigress,
None will break ranks, though nations trek from progress.
Courage was mine, and I had mystery;
Wisdom was mine, and I had mastery;
To miss the march of this retreating world
Into vain citadels that are not walled.
Then, when much blood had clogged their chariot-wheels
I would go up and wash them from sweet wells,
Even with truths that lie too deep for taint.
I would have poured my spirit without stint
But not through wounds; not on the cess of war.
Foreheads of men have bled where no wounds were.
I am the enemy you killed, my friend.

I knew you in this dark; for so you frowned
Yesterday through me as you jabbed and killed.
I parried; but my hands were loath and cold.
Let us sleep now . . ."

Anonymous said…
Beautiful photo and poem. But I have to confess, the photo made me feel happy. Something in the trees dormant symmetry against the muted sky...

Kris McCracken said…
Thanks everyone, Owen was a genius who died too young. I wonder what would have happened had he survived. I worry that he wouldn't have prospered though, given his homosexuality and seeming death wish associated with that. Such a waste.
24 August 2008 at 19:04