“There is no point in waiting for the right moment when a smooth change might be possible; this moment will never arrive, history will never provide us with such an opportunity. One has to take the risk and intervene, even if reaching the goal appears (and is, in some sense) impossible - only by doing this can one change the situation so that the impossible becomes possible, in a way that can never be predicted.” 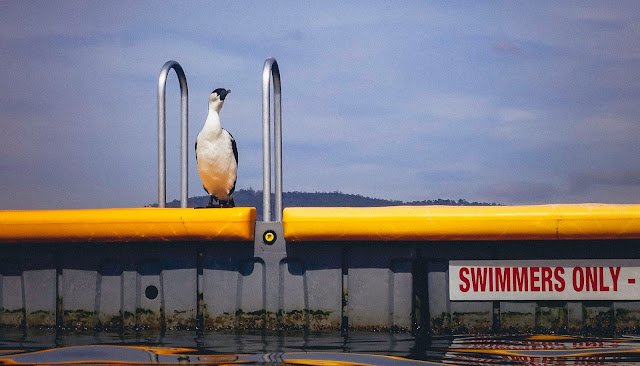 Shag on a rock or a cormorant on a pontoon? Bellerive Beach, Hobart, March 2021.

Like A Thief In Broad Daylight: Power in the Era of Post-Humanity by Slavoj Žižek

Žižek is a funny bugger. This is more a collection of essays with a loose connective thread than a consolidated and coherent thesis. I very much enjoyed (perhaps not the right word) those elements exploring the breakdown of any ideological consensus. For mine, Žižek accurately identifies the failures of the left to reconcile with those most disaffected by prevailing neoliberal globalism that has seen an immense benefit to the few at the expense of the many.Conversely, I have no interest at all in those sections exploring the revolutionary potential of Hollywood musicals or his musing on the #MeToo movement. On that, while he is closure to the mark when it comes to Weinstein, masculine ideology and the dominant power structures at play in sexual dynamics, his resistance to the embrace of active consent did read a little too much like self-justification by an old, male academic for my liking. From my time in that glorious world, a genuine reckoning is long overdue!Nevertheless, he does a great job in finding the appropriate balance between the need for focus on particularities - which have dominated contemporary radical and academic discourse since the 1970s - with a cogent argument for not throwing the universalist baby out with the interdisciplinary bathwater.The ground covered bears the heavy hand of Hegal, but I appreciated the attempt to reconcile Marx and Lenin's work with that of Freud and Lacan. While this can be hard-going for the old brain-box, but through it, he has given as convincing analysis of the emergence of Trump as I have seen coming from the left, and his skewering of the false dichotomy between Macron and Marine Le Pen should present food for thought for the Australian Labor Party.As with such collections, it has its highs and lows!⭐ ⭐ ⭐